skip to main | skip to sidebar

Is It Really Summer? 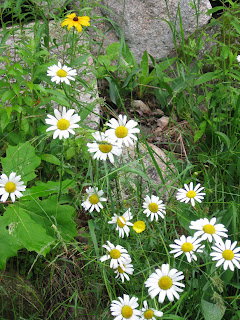 Hard to believe that we are into the last week of June already! Flowers have come and gone, events have come and gone and I am preparing for the next one. I totally missed the pink Lady slippers up the road. Yesterday I did see two small pair of leaves but no evidence of the flowers or old stalks. Since the road crew redid the road we seem to be missing lots of wonderful plants. At last writing I was getting ready for Fiber Frolic. We had rain on Friday while setting up but Saturday was a relatively nice day. There were lots of people - I think they must have heard the report for Sunday's weather - hot and muggy. That it was - not as bad as a couple of years ago though.
As usual there were friends to see and lots of vendor goods to ponder. The highlight of the Frolic, though, is watching the season's new babies cavort in their pens. This year there were several pair of little goats that really enjoyed playing King Of the Mountain on a bag of shavings. Mom and another sibling didn't pay any attention to these two. Rough and tumble was their game alone. 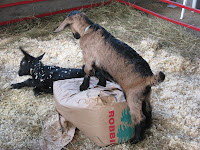 There were cashmere goats and baby Romney/Baby Doll sheep, alpacas and llamas and bunnies. Fiber everywhere you looked - some on two legs, most on four legs - it was a warm weekend remember.

This year I taught the Color Blending for Spinners w 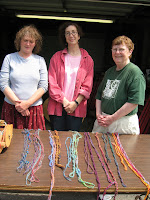 orkshop again. We all had a drum carder so the blending went quickly and the varied yarns these ladies made were terrific. It was fun to work with them and challenge them to blend colors they might not usually pick to spin.

Back at the booth there was a woman who showed me a pair of socks she had made with yarn she bought from me the year before. She had used rows of beads at the top. 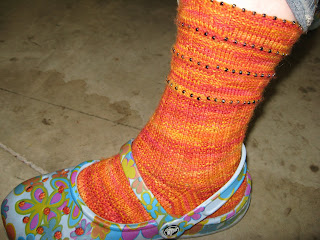 When the Frolic was over some of us stayed around to help clean up after we had our cars all packed up. Once the sweeping was done we had a nice picnic supper on the bleachers before driving home. It was a nice way to cool down after working and before the drive.
It was even warmer at home! Heard they had some pretty high temperatures while we were away.

The weekend after Frolic I went down to North Brookfield, MA for a restorative weekend before the final push to get Pleasant Mountain Fiber Arts ready to go the NEXT weekend. That's what I mean - June? Where has it gone? There were eight of us sharing a cabin on a lake - great food, good companionship - knitting, spinning, even a trip to a nearby knitting shop. The drive down was beautiful - sunny day, blue skies. The rest of the weekend was not as sunny. In fact it was mostly gray with some rain but we all had a great time anyway.

Thursday Dan helped me arrange tables and lights. Friday morning early it was time to open the doors. What can be more frustrating than not being able to get the key to work when you have a lot of excited women coming to take workshops? Well, I am sure they might have wanted their coffee, too, and we couldn't get in to get it made! One of the women ended up having the right touch. Thank God for little favors!

We pinned up items for the Instructors' Exhibit, made the coffee, set out the morning snacks, began directing "traffic" telling people where their classes were located and got down to business.

This is how it looked when one instructor arrived with a car full of felting materials! 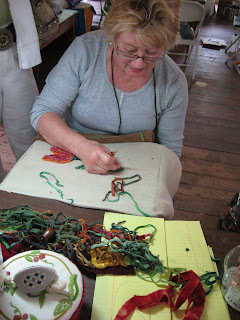 Classes got under way and everyone went right to work. Upstairs and down there was a hum of activity and occasional drifts of laughter. In no time at all everyone was very focused on their fiber work. The landscape felters were laying out their base wool, the hookers were planning their designs and picking out colors, the dyers were learning about color and technique, the rug makers were cutting wool strips and threading their needles, the spinning wheels were turning and the shawl pin makers were twisting and hammering wires into fantastic shapes. After a break for lunch some of the students went right back to work on their projects while others switched gears for afternoon classes. 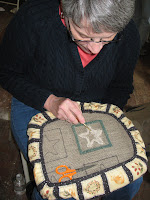 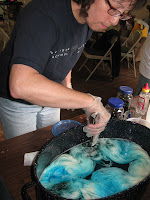 
Jane pot dyeing a skein then hand painting a batt. 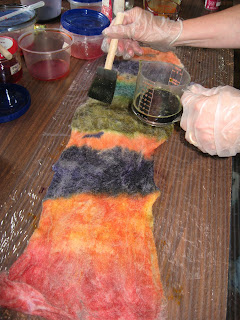 This was really fun! 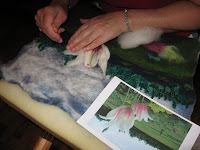 Jan needlefelting a tulip. You can see the picture she used for her inspiration even though it is up side down in the photo.

Here is another landscape right side up! 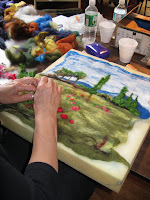 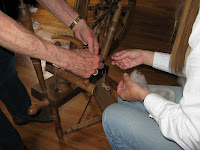 Rudy helping Karen set up her spinning wheel while Libby manned the desk. She did a terrific job and was a real help all weekend! 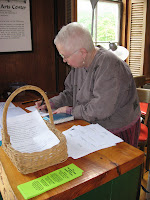 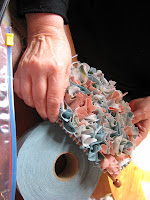 This was the beginning of a confetti rug. Rose Ann taught a variety of techniques for rug making, all were very different. For some reason this photo keeps coming up sideways even though it is not that way in the file. Go figure... 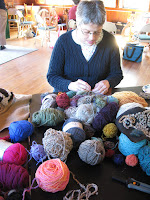 It was a colorful day, and then Saturday we began all over again. Some made felted flowers or penny rugs. 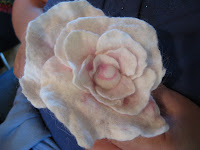 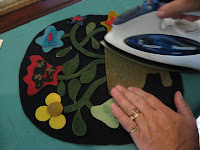 Design ideas were translated into wool shapes and pictures ready to be stitched. 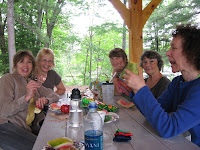 We enjoyed having lunch under the new park pavilion by the lake and then went back to spinning, making baskets and jewelry. 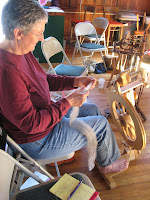 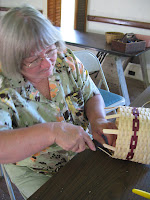 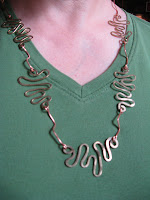 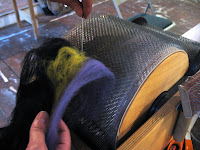 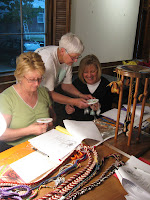 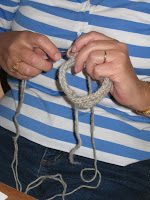 There were more baskets and felted faces 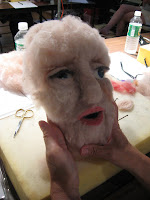 and lots of fun.

When the weekend came to a close everyone was already talking about the classes for Pleasant Mountain Fiber Arts Workshop Weekend 2009. A good time was had by all. How could it not be so? We were all under the spell of Julie's special fairy godmother! 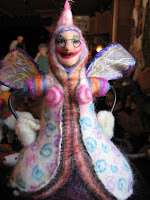 Maybe she will help me get caught up on July soon!
Posted by Linda at 1:10 PM

Oh my! This is SUCH a lovely blog but I see it's been quite some time since you posted. I truly hope you return ~ your blog is delightful and I want more!!! 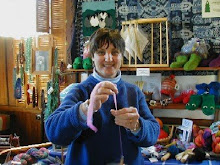